Today marks the centennial of the National Park Service. Established in 1916 to “conserve the scenery and the national and historic objects and the wild life therein and to provide for the enjoyment of the same in such manner and by such means as will leave them unimpaired for the enjoyment of future generations,” the Park Service has grown into one of the most beloved federal agencies in the nation’s history. Its 100th birthday should be cause for a nationwide celebration. Yet, this year could not have gotten off to a worse start for the Park Service.

News broke in March that the Delaware North Company had trademarked the names many of Yosemite’s iconic buildings, including the Ahwahnee and Curry Village, after losing its bid to remain the park’s sole concessioner. The naked money grab enraged the public, especially after the park was forced to change the name of every building while waiting for the courts to settle the issue. Then in May, reports of the Park Service’s low employee morale, caused by the agency’s chronic funding issues, reliance on seasonal employees, and an entrenched leadership flooded the Internet. That was soon followed by stories of widespread sexual harassment at Grand Canyon National Park, which led to a barrage of accounts of unbridled sexism throughout the agency and calls for Director Johnathan Jarvis to step down. Jarvis did not help matters by failing to gain approval before publishing a book on the national parks, a violation of ethics.

Even so, such controversies did little to slacken the torrent of visitors traveling to one of their 413 national units this past summer. Early counts suggest that visitor numbers will swell well past last year’s record breaking 305 million people. And that is a real problem.

As the chronically underfunded agency grapples with how to leave the parks, monuments, and other sites under its care “unimpaired for the enjoyment of future generations” it simply cannot meet the challenges of hundreds of millions of visitors inundating the parks, particularly those units relatively near large metropolitan areas, while meeting its scientific and preservationist mandate.

All of this has caused people to find their parks in overwhelming numbers. Upwards of five thousand come to watch each Old Faithful eruption, making the area around the geyser appear more a rock concert than a natural wonder. Further south, Rocky Mountain National Park has become so crowded that the park took the unprecedented move of telling people not to come to the park if they could not arrive by 8:30 in the morning. Most units in or near metropolitan areas are experiencing similar problems, leading to resource loss. Following climate change, visitation has become the primary environmental issue facing the Park Service.

Furthermore, facing a $12 billion backlog in maintenance, the Park Service has had to rely heavily on corporate involvement for its centennial celebration efforts – including outdoor retailer REI, Disney, and Subaru, each of which have used the anniversary to market their own brands. 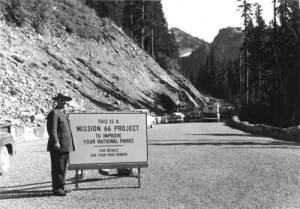 This is not the first time in the Park Service’s history the agency has faced such problems. Following the end of the Second World War millions of Americans jumped into their family car and headed to their favorite national park. Visitor numbers exploded. Yosemite alone welcomed 641,767 visitors, exceeding the record set in 1941 by nearly 50,000. Underfunded due to the Korean War and a general reluctance by Congress to embrace anything that smacked of the New Deal, park infrastructure including roads, campgrounds, and visitor centers, proved unable to meet the demand. Bernard DeVoto’s famous call to close the parks captured the era’s frustrations over a lack of coherent solution to twin problem of visitation and adequate facilities.

The Park Service’s solution however was a ten-year capital campaign called Mission 66 for its planned completion on the NPS’s fiftieth anniversary. Congress funneled millions of dollars into the parks, building new visitor centers, modernizing roads and camp sites, and improving other infrastructure including sewage and electrical.

As National Park architectural historian Ethan Carr points out, while Mission 66 reinvented the national park system and the National Park Service, along with the national park idea, to meet the exigencies of the postwar America. But by emphasizing capital construction over social and environmental concerns, the program provided a one-dimensional solution to complex social and environmental problems facing the park system – a lesson the Park Service should have learned from for its centennial.

The agency and its partners should have seized upon the 100th anniversary to engage the public in a broader conversation over what the next one hundred years should look like by launching a new campaign like Mission 66 to preserve and define what the next century will look like in the national parks. Rather than “Find Your Park” there should have been a “Fund Your Park” campaign promoting a way of not only solving Congress’s reluctance to adequately fund the parks, but also to provide a vision for how to face the complex social and environmental problems of the future.

Such a campaign could have helped foster the national conversation on race by bringing visitors to its exemplary work at place such as Manzanar and Brown vs. Board of Education National   Historic Sites, drawn the connections between cultural and natural resources at places like the Elwha River in Olympic National Park, and build deep emotional ties to all national park units by redefining what national parks could be to this and future generations.

While it is easy to lament the lost opportunity, such a conversation is still possible. In many parks and monuments it is already happening. Perhaps today is a good time to start having it more overtly so that the next 100 years will be as historic as the past 100.