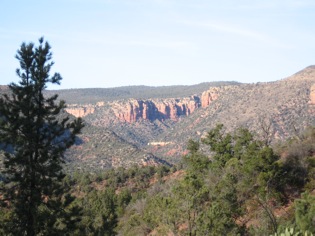 Fossil Springs Wilderness Area in central Arizona, designated along with West Clear Creek and 37 other areas in response to the Forest Service’s RARE II process in 1984, also protects a rare perennial stream and riparian area that supports crucial biodiversity. Like West Clear Creek, the canyon walls define its boundaries. Visitors can almost always see out or across the wilderness area. In some places, the view includes roads and power lines. Photo by author.

September 3 marked the fiftieth anniversary of the passage of the Wilderness Act. On cue, media pundits, environmental organizations, and scholars chimed in to recognize the occasion. I will not attempt to re-hash or debate what has already been said. But, as do my many experiences in those places “untrammeled by man, where man himself is a visitor who does not remain,” the recent observance has caused me to once again ponder the tensions between the static legal concept of wilderness and the dynamic social and ecological systems it protects and to consider the value wilderness in an increasingly complex globalized world.

In January of 2006, while making my meandering way from Montana back to Arizona for the start of another semester of grad school, I stopped off to visit a friend in Wyoming. Within a few hours, I found myself sipping wine and talking wilderness with environmentalists and literary types including Terry Tempest Williams at the Murie Center outside Jackson. The meeting could not have taken place in a more idyllic or appropriate location, beneath the silent watch of the Tetons. The fire in the cozy cabin crackled as the guided discussion took up the question of the value of wilderness for an increasingly urban population that had very little tangible connection to it.

Perhaps because I had recently read William Cronon’s pivotal essay “The Trouble With Wilderness; or, Getting Back to the Wrong Nature” and was in the thick of researching the designation dozens of small wilderness areas in Arizona in 1984, or as a factor of my relative youth compared to my present companions, I was struck by the apparent disconnect between the idea of wilderness as codified in 1964 that continued to undergird the thinking of so many of my fellow activists and what we might think of as the “spirit of wilderness”—a movement to proactively guide government to manage part of the public domain for the long term benefit of human beings and the non-human environment.

Wilderness as designated by law in 1964, for all of the incredible good that it did, reflected romantic—and racist and positivist—ideas more at home in the nineteenth century than in second half of the twentieth. We often begin our telling of the history of the environmental movement with the Wilderness Act but in a way the law’s passage marks the end of long campaign that advocated a way of viewing nature and human’s relationship with the environment particular and the values of a relatively small and privileged group of Americans during a certain period of history. Though wilderness and the protection of “wild” places figured prominently in the environmental movement that followed, environmentalism expanded significantly beyond preservation to address urban issues of toxic waste, public health, and, eventually, environmental justice.

The definition of wilderness immortalized in law is built on the premise that “wild” lands are absent of human interference. Once an area showed signs of “man,” it was tainted and could never achieve the vaulted status of wilderness. Cronon argues that this allowed Americans to preserve these special places at the expense of the rest of the environment. In the twenty-first century, however, it is not a stretch to assume that the great majority of scholars and activists concerned with the environment and protecting wild places will acknowledge that the pristine, un-touched nature of wilderness is a myth. Stephen Pyne’s work on indigenous use of fire in North America should convince most. Bill McKibben’s The End of Nature should extinguish any lingering doubts (and optimism). With climate change, humans have effectively altered every ecosystem in every corner of the globe. Welcome to the Anthropocene.

This presents a problem for orthodox wildernuts just as the scientific revelations of the past half-millennium have shaken countless other orthodoxies in the modern era. If the concept of wilderness is based on certain unbendable truths, that these places are “untrammeled by man,” that are proven impossible by mounting scientific evidence and climate change, then what do we make of wilderness? If American values shift away from nineteenth and twentieth century notions of preservation, what is the future our wild places? With so many pressing global challenges, how important is it that we manage relatively small portions of the public domain to manage their pristine character for a relatively small number of people privileged enough to recreate or make their living in these areas? The static idea of wilderness written into law becomes difficult to defend. And yet, I doubt that many scholars or activists interested in creating a more just and sustainable future would advocate conceding the millions of acres of land protected as wilderness areas to the loggers, frackers, miners, or dam-builders. So where does that leave us?

Wildernuts have drawn a line in the sand. Ed Abbey insisted that “the idea of wilderness needs no defense, it only needs defenders.” As a committed wildernut, my gut inclination is to agree with Abbey. Further, it deserves noting that the designations of dozens of RARE II wilderness area during the 1980s displayed wide degree of flexibility for activists and land managers to protect areas that often challenged the ideals in the 1964 law. But, contemplating the future of wilderness, I think that we need to allow ourselves to break free from the orthodoxy articulated in the Wilderness Act and instead embrace the spirit of wilderness to guide our thinking. My hope is that in the space between the law and this spirit, we will find room to protect wild places and the critical flexibility to adapt to change.

This spirit that I propose draws from the ideas of conservation biology and sustainability and environmental justice studies. It recognizes the dynamic nature of ecosystems and relationship of humans to those systems and understands the vital role of functioning ecosystems in maintaining the biodiversity that is the key to resilience and adaptation to a changing climate. This spirit promotes the protection of intact habitats of adequate size to allow for the survival and thriving of species against encroachments by the growing human population. It seeks to provide places where human beings can connect to non-human nature to recreate, learn, worship, and challenge themselves and a place for our imaginations to wander. This spirit recognizes the historical origins of environmental management and that our management strategies and values, like the wild places we seek preserve, are dynamic and evolving. And, this spirit acknowledges our ability to use the power of government to bring positive change and move our world toward a more just and sustainable future.

I don’t think these ideas would seem radical to the great conservation thinkers and wilderness advocates of the mid-20th century—Leopold, the Muries, Zahniser, etc. The version of wilderness they worked to make law, that now protects more than 50 million acres from mechanized travel and industrial development, fit the values and political possibilities of their times. Looking forward to the next fifty years, let us take inspiration from their vision and the grandeur of the growing legacy of designated wilderness areas to imagine a more sustainable future.

Cody Ferguson is assistant professor of history at Our Lady of the Lake University in San Antonio where he specializes in environmental, digital, and public history. His book This is Our Land: Grassroots Environmental Activism in the Late Twentieth Century is due out from Rutgers University Press in 2015. When not teaching or poring over documents, or developing digital projects, you can find him conducting “research through osmosis” on the trails, peaks, rock faces, and rivers of the American West. You can check out his work at www.codyferguson.com or follow him on twitter @CodyFergusonPhD

2 comments on “Reflections on the 50th Anniversary of the Wilderness Act: Embracing the spirit of Wilderness in the Twenty-First Century”