The Wilderness Act turns fifty this month. Signed into law by President Lyndon Johnson on September 3, 1964, the act has had a profound impact on how we all enjoy National Parks by limiting front country development to already established corridors and governing the number of visitors into wild back country of parks such as Yellowstone, Rocky Mountain, and Yosemite.

While nearly 95 percent of Yosemite is wilderness today, the National Park Service initially resisted designating any of the park as wilderness, arguing that the 1916 Organic Act more than covered wild lands preservation.

Additionally, in 1964 the Park Service was wrapping up its major capital improvements campaign known as Mission 66, and feared that the Wilderness Act would greatly hinder future development within its parks, potentially limiting visitor numbers.

The purchase of the Yosemite Park & Curry Company (YP&CC) by the Music Corporation of America (MCA) in 1973 alarmed wilderness advocates, including  Sierra Club member Josephine Jackson, who in a letter to the Secretary of Interior argued, “the MCA corporation plains for the park will be disastrous.” Newspaper headlines such as the Washington Post’s “Yosemite: Another Disneyland” underscored such concerns that the corporation known more for movies than concessions would look to transform Yosemite into a theme park, eroding Yosemite’s scenic beauty.

Such concerns appear valid given National Park Service Director George Hartzog’s reluctance in embracing Wilderness Act’s exclusion of mechanical equipment. Telling an interviewer in 1965, “I think it is not too early that we do some thinking about this traditional opposition to mechanical lifts and funiculars and railroads in the National Parks because I think that these, perhaps, in many instances can be the greatest conservation devices that we have in national parks.” It was a sentiment wholly out of step with the times.

Despite its early reluctance, the Wilderness Act’s passage compelled all national parks, especially natural parks like Yosemite, to inventory all areas that qualified as wilderness and then form a plan for its management.

Yosemite released its Wilderness Plan with its General Management Plan (GMP) to much fan fair in 1974. Wilderness advocates immediately condemned the both plans as pro-development and not far reaching enough in protecting Yosemite’s natural wonders. The park called for designating 85 percent of Yosemite as wilderness, far too little for wilderness advocates. The larger problem was with Yosemite’s General Management Plan, which misread America’s changing environmental attitudes away from development and towards preservation. After months of political turmoil, the NPS rejected the 1974 plan.

The rejection of the 1974 Management Plan marked a significant change in Yosemite’s management. The park shifted to a more interactive planning process in response to ever-increasing scrutiny by environmental and other interest groups over how it managed everything from the Yosemite Valley and the Merced River to hundreds of thousands of acres of wilderness within the park’s boundaries. 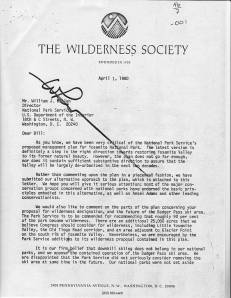 The new wilderness plan designated nearly 95 percent of the park as wilderness, limiting all future development to existing corridors such as Yosemite Valley and Tulalome Meadows. The objectives outlined in the 1980 GMP remained elusive, however, due primarily to a lack of funding by the federal government combined with continued visitor growth and administrative struggles.

A massive flood in 1997 cleared many of the financial and political obstacles to development in Yosemite by providing the needed funding but leading to further lawsuits and delays which continue through today.

In the end, wilderness has acted as a counterbalance within Yosemite to the park’s continued development and popularity. A permit system limits the number of hikers allowed in much of the park, much in the same manner now used to control the crowds of people wishing to climb Half Dome. Both flora and fauna thrive throughout most of the park, though the ecological impacts caused by climate change present yet another challenge to Yosemite’s future. One in which wilderness will no doubt play a role.