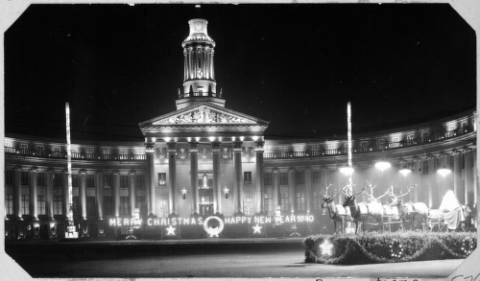 By B. Erin Cole

Denver has been decorating its Civic Center for the holidays since 1919. That year’s display was meant to commemorate the end of World War I as well as instigate holiday cheer: a display of pine boughs mounted on the park’s Greek Theater spelled out “WORLD PEACE” while the park’s usual white lights were replaced with red and green bulbs. The next year, a large Christmas tree was put up in the middle of the park. After the City and County Building was constructed in 1932, the holiday display got larger — in 1950, the city put up an estimated 40,000 lights around the Civic Center.

Today, the light display is limited to just the City and County Building. The thousands of bulbs and spotlights which took city employees hours to set up and maintain have been replaced with color-changing LED lights that are easier to use and more energy efficient. However, changing the lights hasn’t lessened the occasional controversy over the city’s holiday display: the presence of a nativity scene (along with Santa, elves, nutcrackers, and any other Christmas-related symbol you could think of) at the base of the City and County Building and the words “Merry Christmas” at the top represent, for some, an endorsement of religion on the part of the City and County of Denver. Decades of court cases have failed to resolve the issue.

The lights at the City and County Building go on after Thanksgiving, and stay on until the end of the National Western Stock Show in late January — an extended “holiday season” that gives a nod to Denver’s Western heritage. Some Denverites also deliberately keep up their decorations until after the Stock Show, following the city’s lead (I know I am!).

B. Erin Cole is a PhD Candidate at the University of New Mexico

0 comments on “Christmas in the Mile High City”